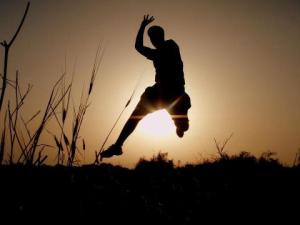 English runner Roger Bannister finished out-of-the-medals in fourth place in the 1500-meter race at the 1952 Olympic Games in Helsinki. Hugely disappointed, he almost quit running. Instead, after thinking it through, the 23-year-old refocused his determination.

He decided to keep running with the goal of becoming the first man ever to run a mile in less than four minutes. About a year later, Bannister clocked a time of 4:03.6, a new British record. That’s when he realized running a four-minute mile was within his reach.

Then, one year later in 1954, Bannister thrilled 3,000 spectators with a mile run clocked at 3:59.4, and opened the door for focused competitors to run faster than that.

Just 46 days after Bannister’s historic run, Australian John Landy ran the mile in 3:57.9. Since then, others have joined the sub-four-minute mile club. In 1999, Morocco’s Hicham El Guerrouj ran the mile in 3:43.13 and set the current men’s world record.

Friend, I hope you’re running strong in the greatest and longest race.

Our gracious heavenly Father is the greatest Coach ever—and he invites us to run alongside him with purpose and endurance. He encourages us to stay on course and imitate his Son Jesus. He cheers when we live as humble, Christ-like champions.

Young Saul was an angry Christian-killer before he met Jesus on the road to Damascus. But with Ananias’ help, he discovered God’s purpose for his life. Rough around the edges at first, Saul grew spiritually—and gradually became a radically different man because he ran with Jesus.

Somewhere along the way, Saul changed his name to Paul—and recognized he had a long way to go. But he was committed to growing in Christ—even in the face of adversity. For years, the young apostle was flogged, arrested and jailed for sharing the good news of Jesus.

That’s when Paul wrote, “Not that I have already obtained all this, or have already been made perfect, but I press on to take hold of that for which Christ Jesus took hold of me. Brothers, I do not consider myself yet to have taken hold of it. But one thing I do:  Forgetting what is behind and straining toward what is ahead, I press on toward the goal to win the prize for which God has called me heavenward in Christ Jesus.” (Philippians 3:12-14).

That’s running with purpose—keeping an eye on eternity.

Another tenacious first-century leader challenged and encouraged us when he wrote, “Let us run with perseverance …” (Hebrews 12:1).

That’s running with endurance—keeping an eye on eternity.

One thought on “Running Strong”

Like a sailor on a sometimes storm-tossed ship, I write with the hope of anchoring you to God's truth so you sail more confidently on your adventure through the seas of life.

Had a blast with Aly and Jon today!
Had a blast hanging out with Kylie yesterday!
Starting week 5 as FT chaplain after interning and working PT since Jan 2016
Prayer walking our future Clovis Campus #thewell
Joined the 153K club tonight #nissanpathfinder #2006
Aly & Kylie, I love you! #nationaldaughtersday